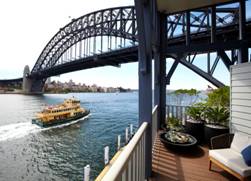 The Sebel Pier One Sydney has unveiled seven of the city’s most spectacular over-water suites with peerless views of Australia’s most iconic landmarks including Luna Park, the Sydney Harbour Bridge and the Opera House.
Located in Walsh Bay and the historic Rocks precinct, the cultural heart of Sydney, the hotel has a prime harbour frontage position which is only rivalled by the nearby Park Hyatt.
The new suites are perched on and over Sydney Harbour. They include four Harbour View Balcony Suites with designer day beds and sweeping panoramic Sydney Harbour views, ideal for watching the ferries and mega-yachts sail past. 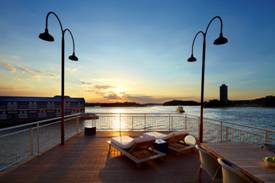 Open-plan, they have a seamless transition from the bedroom to the bathroom and all have an abundance of natural light from the floor-to-ceiling wrap around windows and glass sliding doors. Bathrooms have decadent, deep standalone bath tubs, twin rain showers with side jets, double brass bowl vanities and deluxe amenity kits from Appelles Apothecary. 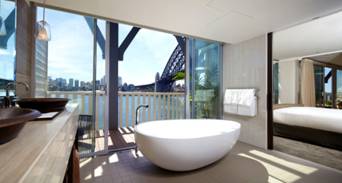 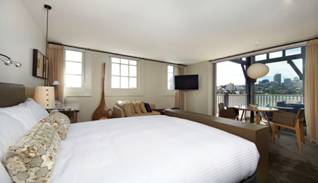 It feels like you’re floating on water, particularly from the deep-set bathtub in the northern premier suite that overlooks the water and iconic Sydney Harbour Bridge.
Guests can arrive by yacht or water taxi via the hotel’s private pontoon, which provides direct water access to nearby attractions including the Opera House, Luna Park and Taronga Zoo.
Ornamental art and designer furnishings have been sourced from around the globe, including regional France.
The wharf where the suites are located has an interesting history. It began life over a century ago as the main wharf for P&O ships bringing cargo and passengers to Sydney from all over the world.
Pier One has been a feature of Sydney Harbour since its construction in 1912. The Pier was used by P&O Cruises as a passenger and cargo terminal until 1977, when works began on redeveloping the site for commercial use. From the late-70s to early-90s, The Pier was a popular attraction that featured restaurants, amusement rides and retail outlets until it was restored and redeveloped into a hotel in spring 1999, just in time to welcome in the new millennium. In 2012 it celebrated its 100th year anniversary.
The Sebel Pier One is the sister property to the Harbour Rocks Hotel.
Rates start from $299 in a standard Heritage King room and $3000 for a Harbour View Suite.
www.accorhotels.com